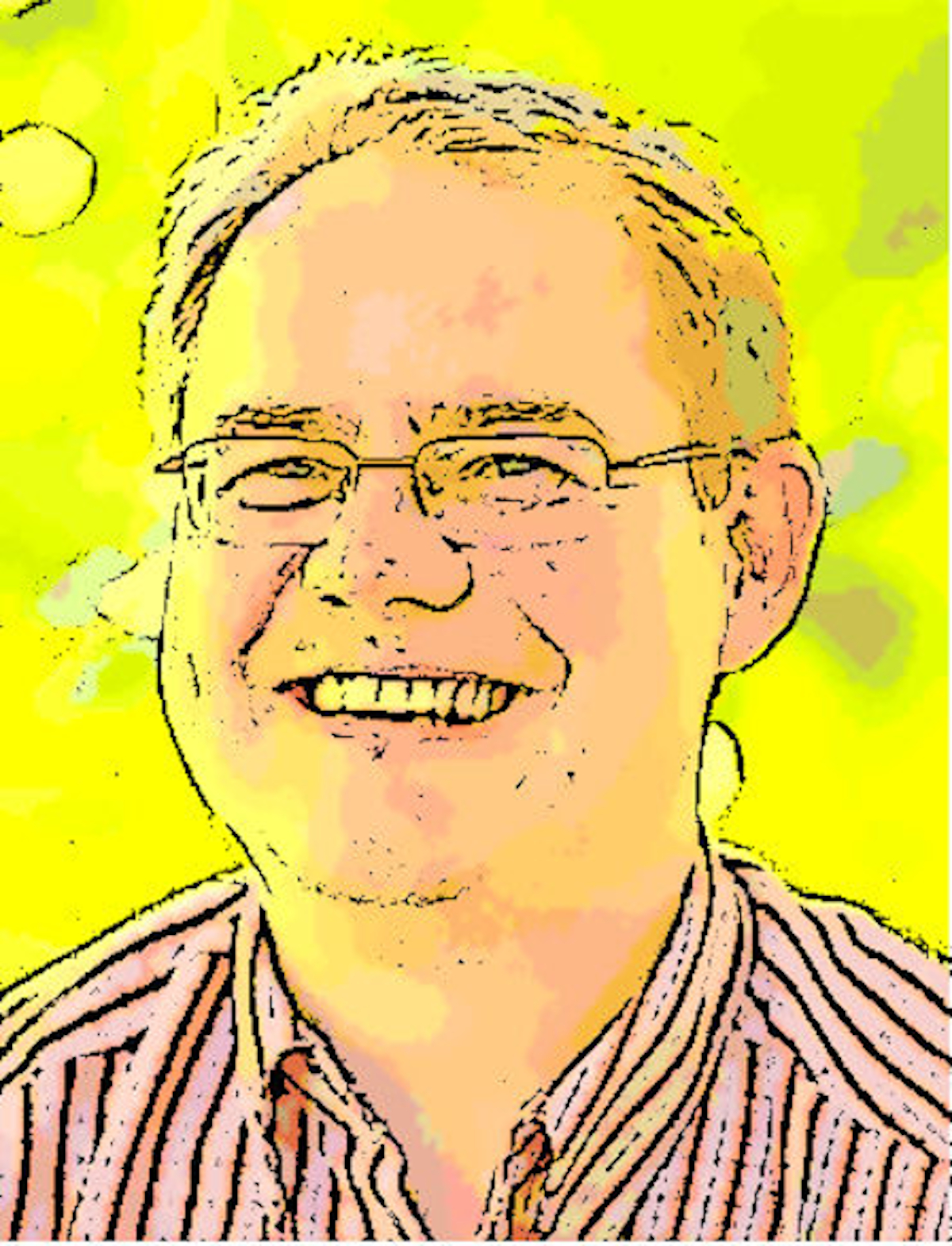 Prof. Matthias Rillig is an outgoing person with a big genuine smile, defeating the stereotype of an uptight always-serious scientist. He is the head of a large and lively research group “Ecology of plants” at the Freie Universität in Berlin. Recently, I’ve given a talk on scientific writing in Matthias’s group, and surprisingly realized that most of the group members — including Matthias — tested as the creative bottom-up writer type. In this interview, Matthias talks about his experience as a writing scientist and his approach to scientific writing.

WritingScientist: Are you currently writing on something?

Matthias Rillig: Yeah, I have always some writing in progress. Even though my job has moved more towards editing other people’s writing, I have recently made an effort to write my own first-author papers. So there is always some of that in progress.

WriSci: Do you enjoy it?

MR: I do enjoy developing new ideas and putting them down on paper. I have learned in recent years that I enjoy it more than anything else. When I do my own writing, it’s hardly ever on experiments I did — because I am hardly ever in the lab. Instead, it’s about ideas and concepts, synthesis, and things like that. And that I do enjoy.

WriSci: And is it going well?

MR: Yeah… I finish a lot of them. They are not huge projects, mostly focused opinion and concept papers. And that goes really well, yeah. Sometimes it comes off more easily than other times, this is what I mentioned when you came to visit: that sometimes I feel like I’m in the “zone”, and then thoughts just come out, and the text just comes out. And all seems nice. Other times you struggle. And of course, it’s never *easy*. It’s not like I write it in a one fell swoop, there is always revising, and thinking about it again, and moving things around, changing stuff constantly. I’m sure it’s what everybody does — everybody kind of “struggles” with writing in that sense.

It would be *terrible* if I didn’t enjoy editing my students’ papers because that’s a huge part of my job.

WriSci: You mentioned the editing work that you do for your students’ papers. Do you like that? How is it going?

MR: This is endless — there is always a line. I do this all the time for PostDocs and students. Do I enjoy it? It would be *terrible* if I didn’t enjoy it because that’s a huge part of my job. I think it’s the biggest chunk. I do enjoy it, afterwards the text seems better, it sounds better, the concepts have been clarified… I also to some degree enjoy just correcting the language. But, of course, sometimes it can be incredibly tedious. And it’s very iterative. It’s just a lot. And also in so many different directions because this is a very big lab and everybody works on different things. Every time it takes the brain to get into that particular topic. But I find it challenging and also enjoyable. I think it’s nice when at the end things come together better than they were before.

WriSci: Now let’s move to your past. Do you remember how you felt about writing when you were a PhD student? How was it to write your first paper?

MR: That’s ages ago — I have no idea [laughs]. I finished my PhD in 1997, that’s loong time ago… I was always writing research proposals. In the system where I was in the US you had to write such proposals for plans for your own work, that was always there. But otherwise, the focus initially was not on writing, it was more like… pure survival in the lab. The biggest challenge I remember was to narrow down my topic. It took me an exceptionally long time, I think about two years, which was tedious, frustrating, and emotionally taxing because I saw other people moving ahead much faster. So that is my biggest struggle that I remember. Then when I had actual data I was pretty excited to have something to write about. But I don’t have any specific memory of how that writing experience itself went. I just kind of did it, together with my advisor who was a native speaker, so the language was not much of an issue. Maybe a bit style, but I don’t specifically remember a massive amount of revision. I think it was pretty straight foreward. I remember sitting at a desk in the conference room and having all the data figures laid out for the first paper and we were just moving them around, taking some notes of how to make a story. But then I have no specific memory at all of how I actually wrote it.

Do you need to revise & polish your manuscript or thesis but don’t know where to begin?

Get your Revision Checklist

Click here
for an efficient step-by-step revision of your scientific texts.

WriSci: And the thesis? Was it a compilation?

The biggest challenge I remember as a PhD student was to narrow down my topic. Then when I had actual data I was pretty excited to have something to write about.

MR: Yeah, it was just a compilation of papers with a mini-introduction and mini-discussion, so there was no extra writing for the thesis. By that time, the papers have been published, or at least submitted, so the thesis was kind of anti-climactic — as it should be. And I think as it is in this lab as well because everybody does the cumulative thesis.

WriSci: Soo.. you don’t remember any problems with your writing when you were a PhD student, right?

MR: Not necessarily… maybe it means I’ve just completely pushed that away. You know, as you only remember the good times… So I don’t know what that means and I don’t want to make it appear like it all came super easy. And I definitely feel like I’m now a much better writer and writing is easier now. I remember having read a lot of papers, I think that’s important for the writing production — because scientific writing is very formulaic, it’s not like creative writing at all. I remember that from some of my first PhD students that seemed like they were better writers, but it was creative writing and at the end that was not what was needed – it had to be all cut back and curtailed to this language that is, you know, “cover your ass” language: “It seems that …”, “it may indicate that …”. It’s all very formulaic. It doesn’t challenge you much as a creative writer.

WriSci: You also mentioned your PhD supervisor who helped you with editing. Could you elaborate more on their influence on your development as a scientific writer? Was there something that you learned from him?

MR: He was an excellent advisor and we were super close. We talked every day about science, for breakfast, lunch, and dinner. And coffee in the afternoon. So there was definitely a constant exchange, but I don’t remember much of his specific input on my writing. When I handed in my thesis, all he wrote on that was “looks good”. I don’t remember crazy rounds of revision. But it may be that I have just forgotten about it…

WriSci: Now a more general question: do you think that writing skills are important for scientists?

When I talk to those super successful researchers, they always mention: “I just LOVE writing”. And they are also extremely good at it.

MR: Well, yeah 🙂 It’s quite clear: when I talk to those super successful researchers, they always mention: “I just LOVE writing”. And they are also extremely good at it. I think writing is an indispensable skill for scientists. Some people even say that it is completely wrong to separate the science from writing because it’s always one. Maybe you’ve said that. And what I kind of discovered from your presentation that, indeed, as I write, there are specific ideas coming that are then elaborated on in the writing. You just start writing things down and then you come up with this hypothesis or that name for something or a specific point that was not clear when you started writing. It was just a vague idea, but as you write, it becomes more clear. That became totally obvious in my last paper.

WriSci: Do you tend to suffer from writer’s block?

MR: No. Sometimes I just can’t be bothered, but when I have to write something, I just write it. A colleague of mine once said “There is nothing more intimidating than a white piece of paper” and that person, obviously, struggled a lot with writing. I see how a white piece of paper can be intimidating — but I just quickly put something on it: a title, my name and affiliation, I write the headers, and some notes, little keywords of what might be important for the different sections. And then it’s no longer white. So I very quickly move past the stage where it is just a white piece of paper. And I don’t get paralyzed — I think that never ever happened to me.

WriSci: As a busy professor, how do you find — or make — time for writing?

MR: I don’t do what you’ve suggested, even though I feel it would be very helpful: to have a selected time spot dedicated to writing and a routine. I guess my routine is sitting on my sofa at home and writing. 90% of my writing happens there. Because here it’s restless, people constantly come in. I do a lot of manuscript editing here, but I write my own papers mostly on my sofa, in the evenings.

WriSci: What advice would you give to young scientists who wish to improve their writing skills?

Always write on something. Don’t wait until the very end with all the writing.

MR: What I tell all the incoming PhD students is: always write on something. Write a summary, or write a part of the literature synthesis. Don’t wait until the very end with all the writing. That always goes wrong. Always produce text — in English, not your native language. And: sometimes I am also surprised by simple mistakes that seem to come from not consciously reading papers, how they are structured and written. As I said, this is not creative writing, it’s not writing a novel — it’s completely different. There are just certain conventions in scientific writing that you need to follow. But I don’t offer specific writing advice per se, that comes when I edit their writing.

WriSci: Thank you, Matthias, for the interview!

Do you struggle with your scientific writing?
Would you like to make your scientific texts better and your writing process easier?
Then join us in this exclusive live masterclass: